This ad for the latest Bajaj Avenger 180cc DTSi, has captured a lot of attention. With a caption “Feels Like God”, there is a lot of talk going on about it. It’s a bit late to write a review, since the ad came out almost a year ago, but considering the fact that even agency FAQs has not written anything about it, I think I am well in time with the review.

The ad is targeted at the executive segment and Bajaj has always got it right with this segment. First they did it with Bajaj Pulsar, their caption “Definitely Male” along with the excellent vehicle made sure that Pulsar would be the market leader in this segment. Other automobile manufacturers are trying in vain to dethrone Pulsar. 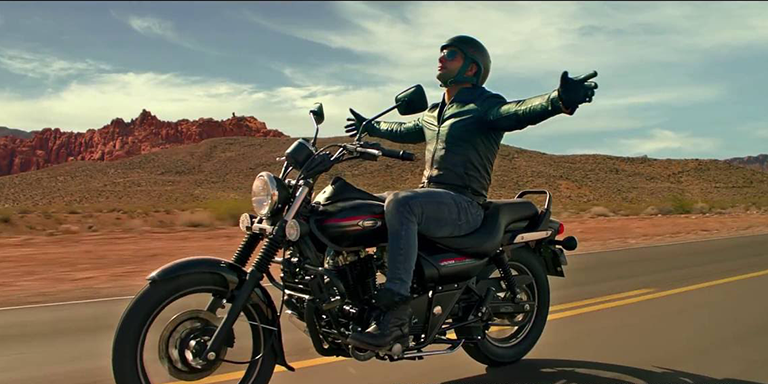 Avenger also follows the Pulsar way, trying to get to the attitude of their target
segment. There are no celebrities, no sexy female with her seducing looks, no specifications of the bike, no advantages regarding fuel efficiency, nothing. Just the bike, the guy and the way he feels while driving it. Simple enough.

The ad starts with a macho guy, with a stub, wearing a black T-Shirt and a black jeans, driving his Bajaj Avenger through the roads of Ladakh. As he is driving, he remembers his dad slapping him, which is shown in black and white. As the ad comes back to the present, the guy takes preventive action and the voice over says, “I forgive my dad”.

He encounters a hole in the middle of the road, and as his bike jumps out of the hole, he looks back at it, and the voice over says, “I forgive the government”.

The next scene that he remembers about is that of his barber about to give him a shave. Coming back to the present, he licks at the scar below his nose and the voice over says, “I forgive my barber”. As he drives along, he sees a local who was sitting and weeding the path. The local gets up, arcs his back to relieve the pain, and the voice over says, “I feel……. I feel like….”.

Then he looks up to the sky, while the voice over says, “I feel like god”.

This ad is just too cool and “I forgive my dad” and “I forgive the government”, were too good. No wonder this had provoked many of us to go for the bike even!!!

This article is about Creativity, Marketing and written by Vaibhav Goswami. An engineer by birth, staunch Hindu and a Shiva bhakt, Vaibhav also raps and does it quite well. Read all their articles.

Read other readers' 3 comments or write your own.

Networking: Not Working In India?

For those of my dear friends knowing little or absolutely nothing about my business, there are...