Fuel For A Journey Called Life

For months, I had completely disconnected from news and newspapers simply because of the extent of negativity they concentrate on. I do have all the respect for media – paper and electronic – much more than what they deserve; still, I feel what we’re witnessing these days is the all-time-worst decline in journalism standards (so in India, at least).

Fortunately, we also have some quality options like Times of India – Crest Edition (thanks to Kaushal for referring this to me, I’ve been a regular reader again). I was recently reading about Security and Privacy in their recent issue (Cover Story: Dec 18, 2010). Putting aside Wikileaks and Assange’s method of reaching the truth, the message is clear that balance is disturbed. Bad is weighing over Good and if the Karmic Law is to be believed, we’re in for a big trade here.

I turned pages and appeared the epic 2G scam. People in the West are moving to 4G and our ministers (and TelCos) are spending billions to make sure we don’t move to 3G as well! Surprisingly, amidst extreme pessimism and negativity, somewhere I could sense the ray of hope. As they say, this too shall pass!

Probably the reason is something I’ve been noticing and trying to pen-down through an age-old (incomplete) article; something I started typing back in 2007 and never published. Here’s the deal before you read further: You have to take a scratch-pad and pen/pencil before you continue reading (or simply open ‘notepad’ on your computer). Just ponder upon this title (Fuel To A Journey Called Life) for a minute and write down everything that passes through your mind, the thoughts. Also, write what you think is the ‘fuel for the journey of your life’. (Write. Don’t write. I’ve written a full article. Made me feel great. It’s your call now.)

I recently realized (with some repeated experiences) that I’m not the only good person out in streets and really felt the need to write about it. Humanity, even outside the textbook chapters, has a great significance to one’s being – as great as food, clothing and shelter. Though many people really enjoy living an insignificant life with no emotions associated, nobody can deny the positivity of a smiling face and a helping hand. At least, I can’t. In my recent routine interactions, I came across some people who really meant and cared to be human.

1.    Ageing back in December 2006, I had to visit Bilimora (my hometown, in Gujarat). From Pune. Unplanned. Thanks to Yogi, I had a confirmed reservation in Ahimsa Express. At 6 PM, I was still stuck in an auto-rickshaw near Khadki station – at least an hour away from Pune Station considering the traffic. I decided to take the road, crossed the railway line running with big heavy bags in both the hands. (I like to describe this part as ‘like Shah Rukh Khan’ during in-person conversations. Anyway.) I reached the Old Highway, with less than half an hour left. I was screaming, crying for the lift. But even auto-wallahs didn’t stop, let alone private vehicles.

To my great luck, three workers (labourers, ) were returning from their work on bicycles. With axes, saw, big hammers and other tools already loaded. They stopped by even without me asking. One explained how I wouldn’t get any vehicles there; the other two loaded my bags on their bicycles. First one asked me to sit on the rear ‘stand’.

In less than ten minutes, we were at a Traffic Signal in Shivaji Nagar. They dropped me saying they had to take another route, and just went away before I could even thank them!

I was feeling relieved too soon. My problems weren’t over. I was still halfway with no means to make it to the Railway Station in time.

Enter, a Sudanese Student on a moped (a bicycle-like low-powered two-wheeler?)! He (too) assumed I needed a lift – he adjusted my bags in little available space, asked me to sit wherever I could and we took off. He managed to slip through crazy traffic in Shivajinagar and dropped me right outside the station – 5 minutes before departure! He told me his name, but I couldn’t understand his accent. By the time I took out my business card, he had disappeared into the traffic…

2.    A few months later (on April 20, 2007, to be precise) I was in Ludhiana for two of my very close friends’ wedding. (They were getting married to each other, that is). It was supposed to be a great Indian-fat-wedding experience for me. Instead, an a$$ from work asked me to prepare some document and send it to him the very day. (You see, usually people don't carry laptops when attending a wedding.) While others were approaching cocktail party, I had to look for a Cyber Café in the unknown land. I was standing by the roadside, on the outskirts, looking for someone to guide me. And two guys on a scooter (Hamara Bajaj!) emerged!

Apparently, the closest internet place in the city was at least 10 KM away. And the scooter was in no great shape even to carry one person – let alone three of us. Eureka: one of the guys stayed with me, and the other went back to their home. Brought his car this time and dropped me at a Cyber Café in the city. They were willing to wait till I got done, but I just couldn’t take more favour from them.

I finally sent the document and I was in the same catch again. I needed some transport to a remote place outside the city. Came to my rescue a Sardarji on a Bullet! He just looked at me ( kinds), assumed I was an outsider-attending-a-wedding-in-Ludhiana-outskirts. like “Bahar ho? ? Auto ho? Bullet pe lift ?”

I can’t recall what I replied, but quite shortly I was high and dancing over some amazing Punjabi numbers at the cocktail party.

3.    I’m still using the Television my friends gifted me a few years ago. Emotions apart, it was one of the most advanced and cross-technology-compatible TV back then. Thanks to this new TV, I was finally getting a chance to set up some complicated configuration – connecting the TV, Laptop and the Audio system. I needed an S-component cord to realize this dream.

We, the Pune people, tend to turn to Lakshmi Road for any ad-hoc requirements. We need something and don’t know where to look for it, we end up at Lakshmi Road/Tilak Road. And we’re never disappointed. Anyway.

I was at Lakshmi Road with no clue where next to go. I checked in some random Electronic shops with no help. In my desperate attempt to find this rare electronic item, I also checked with garment shops and Mithai shops. Appeared one of the attendants at a sweet shop (Kaka Halwai), who thought he knew where I could find such a thing. He offered to walk me to this small shop.

Unfortunately, they didn’t have S-component. But they did have an idea of another shop in Shaniwar Wada, who had it for sure. The Shop-guy took me to this other nano-size shop in a real interior street. It was one inexhaustible source of electronic spares – including the S-component! I offered the shop-guy some money for his great help, but he politely refused.

There’s another story of how cabbies and auto-wallahs in Bombay went out of their way, helping me reach Bandra Band Stand from Goregaon in heavy rains – for practically no money.

I guess we get the point here. It’s not just about how lucky I had been on different occasions; I’m glad there are people willing to stay human and act like one. Humanity isn’t extinct as yet. And it’s our responsibility to carry this legacy to the future generations.

Coming back to ‘Fuel To The Journey Of Your Life’, if you had jotted any points do share them here. In fact, why not write an article altogether? 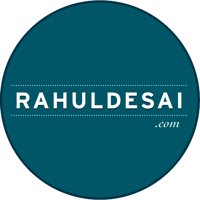 The trick to the authentic blogging lies in the individuality. Originality is Individuality. It’s the individual view, opinion, or thought that is unseen, unheard of before. The author's opinion combined with facts about a topic makes an original and unique blog post.